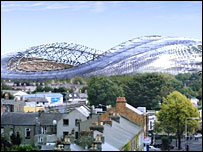 The project to transform Lansdowne Road into a 50,000 all-seater stadium has been given planning permission by Dublin City Council.

The redevelopment of the famous old venue at Ballsbridge is expected to start in 2007 and is likely to take two years to complete.

Permission was granted after a long period of consultation with local residents who had expressed concerns.

A number of conditions have been attached to the planning approval.

An Irish RFU statement welcomed the aproval but conceded there was still some way to go in the process.

"The importance of this project for the future well-being of the whole of Irish rugby cannot be overstated," the statement read.

"Significant progress has already been made at the halfway point in the IRFU's four-year Strategic Plan and the potential presented by the new stadium is a key element in that mission."

Irish rugby and football bosses have said their planning permission application to redevelop Lansdowne Road will be submitted by the end of 2005.

Work on the 250 million Euro facelift is now not expected to start until 2007 and the project is unlikely to be completed before 2009.

"We hope to show the proposed designs to our stakeholders in the next month," said IRFU chief Philip Browne.

"Architects are putting the final touches to the design."

Browne said he was "confident" a planning application would be lodged before the end of the year.

"The overall plan announced last year envisages work on the stadium commencing in 2007, subject to planning, with a 27-month construction programme," the Irish Rugby Football Union and the Football Association of Ireland added in a statement.

The new-look Lansdowne Road will have two three-tiered stands along the sides of the pitch, replacing the current East and West stands.

Smaller, single-tiered stands will be built at either end of the pitch.

This entry was posted in Uncategorized. Bookmark the permalink.